Use the video and step-by-step drawing instructions below to learn how to draw Princess Merida from Disney•Pixar's Brave. A new cartoon drawing tutorial is uploaded every week, so stay tooned! 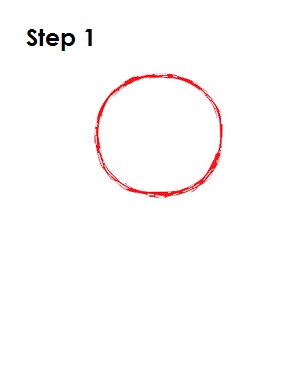 Step 1: Start by drawing a circle near the top of the page. This will be the basic shape for Merida's head. It doesn’t have to be perfect. It’s just a guide. Step 2: Next, draw two intersecting lines across the circle, one vertical and one horizontal. Bend the lines so that they contour to the shape. Under the long horizontal line, draw two smaller lines. These will be construction lines that will help you place Merida's facial features later on. Step 3: Draw two small shapes similar to little footballs as guides for Merida's eyes. Draw them sitting on top of the horizontal construction line and on either side of the vertical construction line. The shape on the right should be a bit smaller because of perspective. Step 4: Under the head, draw a couple of curved lines as guides for Merida's neck and shoulders.

Step 5: That’s it for the initial sketch! You have the basic shape of Princess Merida from Brave. Now go in and tighten your drawing. From this point on, press harder with your pencil in order to get darker lines and a more defined sketch.