How to Draw Marceline

Use the video and step-by-step drawing instructions below to learn how to draw Marceline the Vampire Queen from Adventure Time. A new drawing tutorial is uploaded every week, so stay tooned! Step 1: Start by drawing a small oval at the top of the page. It doesn't have to be perfect. It's just a guide for the Marceline's head.

Step 2: Next, draw two intersecting lines across the oval, one vertical and one horizontal. Bend the lines so that they contour to the shape. These will be construction lines that will help you place Marceline's facial features later on. Step 3: Under Marceline's head, draw a small line as a guide for her neck. Below the line, draw a circle that's smaller than her head as a guide for the upper part of her torso. Step 4: Draw another circle of similar size to the upper torso underneath as a guide for Marceline's lower torso. Connect the two circles with curved lines to finish drawing the guide for her torso. Pay attention to the space between the circles. If you draw the circles are too far apart, Marceline's body will end up too long. The space in between should be a bit smaller than the circles themselves. 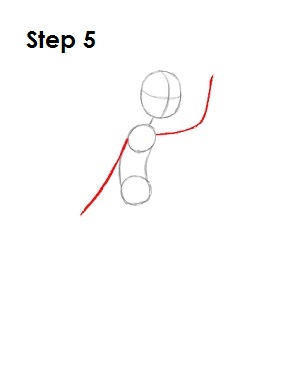 Step 5: Draw two lines that begin on the upper part of the torso as guides for her arms. That line on the left curves down and away from Marceline's body. The line on the right should bend up toward her head.