Use the video and step-by-step drawing instructions below to learn how to draw Ash Ketchum from Pokemon. A new drawing tutorial is uploaded every week, so stay tooned!

Intro: Start drawing Ash Ketchum from Pokemon with a pencil sketch. In the beginning stages, don’t press down too hard. Use light, smooth strokes for sketching. Step 1: Start drawing Ash Ketchum with a rectangle that has rounded edges and slightly bulges out at the sides. This will be Ash Ketchum’s head. Step 4: Now draw in the shape of Ash Ketchum’s face. Draw a line that starts on the left side below Ash's cap and curves inward towards the middle of the head shape. Then make this line come back out to meet the bottom left corner of the original head shape. This is Ash Ketchum's cheek. Make an extra wide V shape to make his chin. From the right side of this V shape, draw a vertical line up to the brim of the cap. This last line should be inside Ash Ketchum's main head shape. 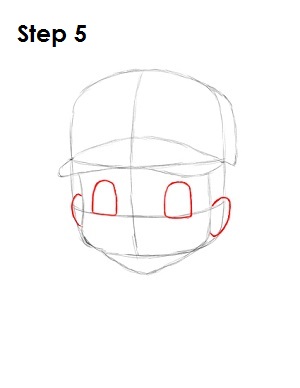