Step 15: Use the initial triangle-like shapes on top of the head as guides to draw Nick Wilde's fox ears. Follow the basic path of the guides but make the lines curve more on the sides and at the tips. Inside the ears, draw another curved line to indicate the inner ear structure. Add a series of quick, short strokes inside each ear to represent fur. 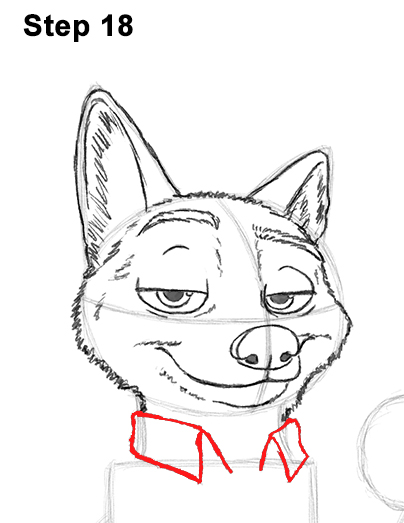 Step 19: In the middle of the shirt's collar, draw a shape similar to an upside-down triangle for the tie's knot. Add two short lines on the top corners of the knot toward the collar to indicate the part of the tie around Nick Wilde's neck. Under the knot, lightly sketch two long vertical lines for the rest of the tie. When you get the position of the lines right, darken them. The lines should end at the lower edge of the initial rectangle. The vertical lines should be closer together at the top and farther apart at the bottom. Draw a V-shaped line at the bottom for the tip of Nick's tie.