Step 6: On the right side of the body, draw two lines that slope upward as guides for the other arm. At the end of the lines, draw a small circle as a guide for Jack-Jack's other hand. Step 7: Under the body, on the left side, draw two vertical lines as guides for Jack-Jack's leg. At the bottom of those lines, make the sides wider as a guide for the foot. Step 8: Draw two more lines under the body, on the left side as guides for Jack-Jack's other leg. The bottom part of the line on the right should angle outward to create the guide for the foot. Step 9: Draw a small arc sitting on the horizontal construction line, to the left of the vertical line for the first eye. Sketch lightly at first to get the shape right. Add a small line at the bottom to close off the shape. Add another arc to the right of the vertical construction line for the second eye. Pay attention to the size of Jack-Jack's eyes in relation to the head. They should also be pretty close together. When you get the position and size of the eyes right, darken the lines. Step 10: Inside each of Jack-Jack's eyes, draw a small circle for the irises. The irises should be pretty close to the inner edges of the eyes. Inside each iris, off to the side, draw a tiny circle to represent glare. In the middle of each iris, draw another small circle and shade them in for the pupils.

Step 11: Draw a small, curved line directly where the construction lines meet for the top of Jack-Jack's nose. Underneath, draw a couple shorter, curved lines for the nostrils. Step 12: Use the horizontal construction line as a guide to draw the bottom part of Jack-Jack's mask. Follow the basic path of the guide but make the line for the mask wavier. High above the eyes, draw a couple of arcs for the top part of the mask. The top of the mask should follow the curvature of the eyes. The line should dip and meet in the middle. Connect the top and bottom part of the mask using curved lines on the sides. Step 14: Use the C- shaped lines on the sides of the head as guides to draw Jack-Jack's ears. Darken the guides but make the shapes a bit more angular. Inside each ear, draw an angled line for the inner structure. Step 16: On top of the head, draw a couple of lines that curve up to a pointy tip for Jack-Jack's hair. Step 17: Use the two sloping lines on the left side of the body as guides to draw Jack-Jack's first arm. Darken the guides but make them wavier to represent cloth. Step 19: Darken the sloping lines on the right side to create Jack-Jack's second arm. Make the lines wavier for the cloth. Darken the lower, left edge of the small circle for the cuff. Step 21: Darken the sides of the initial circle that's under the head to create the body. Add a few curved lines inside to emphasize the shape of Jack-Jack's belly. Step 22: Darken the guide on the lower, left side to create Jack-Jack's first leg. Make the lines curvier and add a line inside the foot. Step 23: Darken the guide on the lower, right side to create Jack-Jack's second leg. Make the lines wavier as you darken them for a more cloth- like texture. Step 24: For a more finished look, carefully go over the final sketch lines with a pen or marker. Step 25: After inking, get rid of the pencil mark s with an eraser. 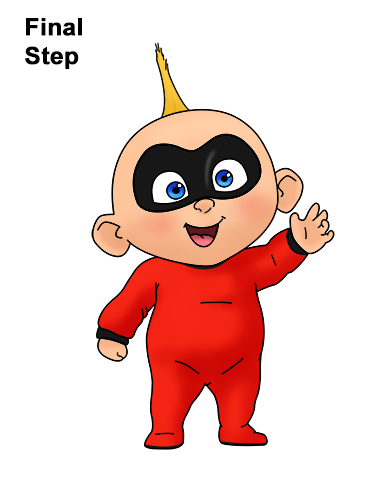 Final Step: Color your Jack-Jack drawing using color pencils, markers or crayons! Color the skin peach. If you don't have peach, use yellow- orange or light brown. Use yellow for the hair and black for the mask. As you add the black, push lighter on a section next to the eye on the right to represent shine. Add black on the collar, cuffs and soles of the feet.

Use red for the rest of the onesie. Add the color lightly at first, and then gradually build up to the level of darkness that you like. Don't overlap the red with the black because you're Jack-Jack drawing may get smudged. Add a bit of brown on top of the red to create shadows and give the figure more dimension. Add the shadows on the bottom and left side to indicate that the light source is coming from the top, left. Use a mixture of dark blue and light blue for Jack-Jack's eyes. Use dark brown for the inside of the mouth and pink for the tongue.