How to Draw Spider-Man (Full Body) Step 15: Between each diagonal line, draw a small curved line to complete the webbing on the top part of Spider-Man's mask. This process is very slow and repetitive, so the video is sped up a bit. Step 16: Add small curved lines in between the lines at the bottom of Spider-Man's mask as well. This process is slow and repetitive, so this section is sped up too. 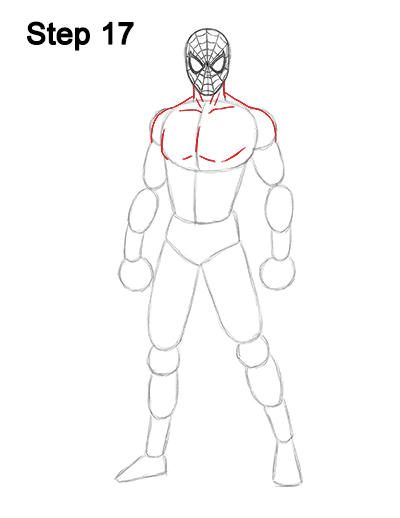 Step 17: Use the shapes under the head as guides to draw the top part of Spider-Man's torso. Follow the basic outer path of the guides as you darken the lines to create the shape of the neck and shoulders. The line that connects the neck to the shoulders should be drawn a little higher to indicate the trapezius muscles. Draw two horizontal lines near the top edge of the initial oval shape for Spider-Man's collarbone. Add a few diagonal lines under the head for the neck muscles. Draw the shape of the chest by using the initial oval as a guide. Draw a few lines close to the bottom edge of the initial oval for the pectoral muscles. Step 18: Use the initial lines and shapes as guides to draw the bottom part of the torso. Follow the basic outer path of the guides as you darken the lines to create the shape of the torso. Draw a couple of lines below Spider-Man's chest for the bottom of the rib cage. Add a few vertical lines near the middle for the abs. The abs aren't as pronounced because Spidey isn't an overly muscular character, like Colossus, for example.