Step 6: Draw two tilted U shapes on either side of the vertical line beneath the center horizontal line to create Pikachu's arms. Under his body on either side, draw two triangle shapes that point outward for his feet. 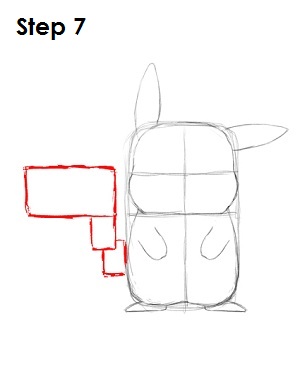 Step 7: Break down Pikachu's tail by drawing a series of rectangles. This will make it easier to draw later. Draw a wide horizontal rectangle to the left of his head at about the height of the top horizontal construction line. Then draw two smaller vertical rectangles underneath it, with the lowest rectangle touching Pikachu's body. Step 8: That's it for the initial sketch of Pikachu from Pokemon! You have the basic Pikachu shape, so now you will go in and tighten your drawing. From this point on, press harder with your pencil in order to get darker lines and a more defined sketch. Step 9: To create this Pokemon character's eyes, draw two circles that sit on top of the top horizontal construction line on either side of the vertical line. Draw two smaller circles inside of them to represent glare. Shade in the eyes except for the inner glare circles. Draw a tiny upside-down triangle where the top horizontal construction line and the vertical line meet. This will create Pikachu's nose. And right below his nose, draw a wide and rounded-off W-shaped line for Pikachu's mouth. Step 10: Darken in Pikachu's ears and head. Draw two diagonal lines on the top part of his ears and draw two circles on his cheeks.