How to Draw Squidward Step 7: Under the rectangle, draw a small half circle as a guide for the bottom part of Squidward's torso. Then draw two long lines under the half circle as guides for his legs. At the end of each leg, draw an oval as guides for this SpongeBob Squarepants character's feet. Step 9: That’s it for the initial sketch! You have the basic Squidward Tentacles shape, so now go in and tighten your drawing. From this point on, press harder with your pencil in order to get darker lines and a more defined sketch. 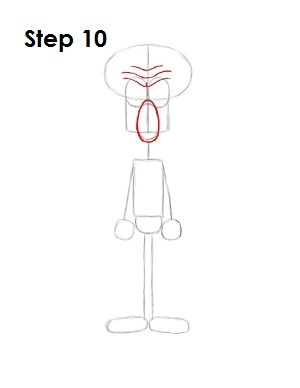 Step 10: Darken the shape of Squidward’s nose and draw it a bit longer. Unlike SpongeBob SquarePants, Squidward isn’t a very happy cartoon character, so give him a few lines above his eyes to represent a scowl.