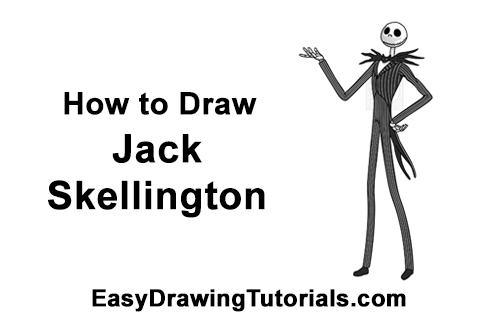 Use the video and step-by-step drawing instructions below to learn how to draw Jack Skellington (Full Body) from Tim Burton's The Nightmare Before Christmas. Stay tooned for more tutorials!

To draw Jack Skellington step by step, follow along with the video tutorial below and pause the video after each step to go at your own pace. You may find it easier to follow the step-by-step drawings below. The new lines in each step are shown in red, and each step is explained in the text below the photo, so you'll know exactly what to draw in each step. You may want to open the video in a new tab and use both drawing methods! Take your time and draw at your own pace. Step 1: Draw a small circle at the top of the page as a guide for Jack Skellington's head. First make four marks to determine the circle's height and width. Then connect the marks using curved lines. If you're struggling to draw the circle, just trace the outer rim of a small, circular object like a coin or a lid. Step 2: Inside the head, draw two intersecting lines as a guide to help you place Jack Skellington's facial features later. Pay attention to the placement of these lines. Curve the lines so that they contour to the circle. 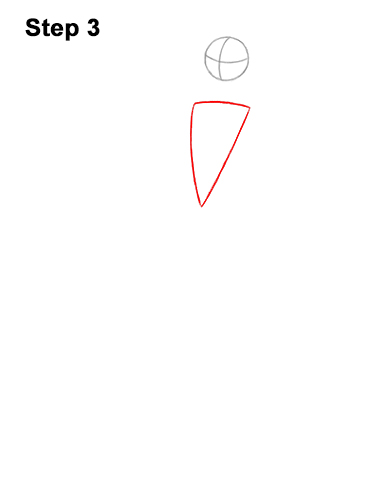 Step 3: Below the head, draw a big triangle as a guide for the Pumpkin King's torso. Start with a horizontal line at the top. Add a big, V-shaped line at the bottom to complete the triangle. Jack Skellington's has a long body, so make this triangle long. Step 4: At the top, draw two short lines that connect the head to the torso to create the guide for the neck. Below the triangle, draw a small, square-like shape to finish the guide for this Nightmare Before Christmas character's torso. 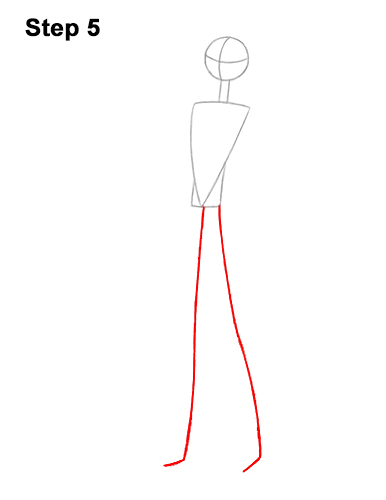 Step 5: Under the torso, draw two very long vertical lines as guides for this Halloween Town resident's legs. Jack Skellington has really long legs, so make these lines about one and half times the length of the head and body. The line on the right should slope to the right slightly, while the line on the left should be more vertical. Bend the bottom tips of the lines to indicate where the Pumpkin King's feet will be. Step 6: On the top, left side of the body, draw a big, V-shaped line as a guide for the first arm. On the right side of Jack Skellington's torso, draw a big line similar in shape to a greater-than sign (>) as a guide for the other arm. At the end of each line, draw a shorter line to indicate where the hands will be. That's it for the guides! For the next steps, use darker lines for a more defined drawing of Jack Skellington from Tim Burton's Nightmare Before Christmas. Step 7: Inside the head, draw two small circles for the eyes. Make the eye on the left a bit smaller. Use the lines inside as guide for the size and placement of Jack Skellington's eyes. Don't draw the eyes too far apart. Shade the insides of the eyes. Step 8: Between Jack Skellington's eyes, near the horizontal construction line, draw two tiny ovals for the nose. Near the bottom edge of the circle, draw a long, curved line for the mouth. Sketch the mouth lightly at first. When you get the curvature right, darken the line. Draw a series of short lines along the mouth for the teeth-like markings. Step 9: Use the initial circle as a guide to draw the rest of the Pumpkin King's head. Darken the initial shape but make the top part a bit more narrow. Curve the left side near the eye a bit to emphasize Jack Skellington's brow. Step 10: To the left of the neck, draw a small, V-shaped line for the first part of Jack Skellington's bat-like bow tie. At the top of the V-shaped line, draw two small, triangular shapes for ears on the bow tie head. Sketch lightly at first. When you get the triangular, bat-like head on the bow tie right, darken the lines. Inside the head, draw two small, tilted ovals for the eyes. Step 11: To the left of the bow tie head, draw three, thin, long shapes for the wing-like sides of Jack Skellington's bow tie. The shapes don't have to be perfect. In fact, it's better if they're a bit irregular and wavy. Don't make the shapes too long. Draw the shapes shorter the farther up they are. On the right side, draw three more thin, long shapes for the other side of the wing-like bow tie. This side of Jack's bow tie should be bigger and longer than the left side because of the way the torso is turned. Use wavy lines as you draw the shapes and make the shapes shorter the higher up they are. Step 12: Use the angled line on the right side of the torso as a guide to draw Jack Skellington's first arm. Darken the guide to create the left edge of the arm. Draw a short, curved line at the bottom for the cuff. Draw another angled line to left for the other edge of this Halloween Town resident's thin arm. Draw the two edges close to each other so that the arm is thin. Draw a series of thin, short shapes along the curved line at the bottom for the bony hand and fingers. Step 14: Use the V-shaped line to the left of the body as a guide to draw the Pumpkin King's other arm the same way. Darken the guide to create the top edge of the arm. Add a small line in the middle for the crease at the joint. Add another angled line below to complete the shape of Jack Skellington's arm. Close off the shape on the top, left. Keep the lines close to each other so that the shape of the arm remains thin. Draw a couple of thin, short shapes along the small guide at the top for the hand. Draw even thinner shapes along the left side for the bony fingers. Step 15: Darken the long line under the torso on the right side for the first part of Jack Skellington's leg. Draw another long, sloping line on the left to complete the leg. Close off the shape at the bottom. Keep the lines close to each other so that the leg is thin. At the bottom, draw a curved line for the shoe. Step 16: Darken the long guide on the left to draw Jack Skellington's other leg the same way. Draw another long line close to the guide to complete the shape of the leg. Darken the side of the torso too. Keep the leg thin and close off the shape at the bottom. Draw a small, curved shape below the leg for the shoe. Step 17: On the right side of the legs, below the hand, draw the coattails as a series of curved, sloping lines. Jack Skellington's coattails are made up of two long, sloping lines for the sides and a shorter, angled line in the middle. Step 18: Go over the final sketch lines with a pen, marker or any other type of permanent ink. Take your time and be careful when you ink your drawing to avoid any accidents. After the ink dries, get rid of every pencil mark with an eraser for a cleaner drawing of Jack Skellington from Tim Burton's Nightmare Before Christmas. Final Step: Color your Jack Skellington drawing using colored pencils, markers or crayons! Use black for the stripes on the suit. Don't overlap the small eyes on the bat-like head as you color the bow tie. Make the black stripes wide so that it in turn creates thin white stripes. Use black for the coattails and shoes. Adding the stripes can be time-consuming, so be patient and take breaks. Add a little bit of gray on this Halloween Town resident's head and hands to create some shadows and give the figure more dimension. Don't forget to pause the video after each step to draw the Pumpkin King at your own pace.