How to Draw Rudolph the Red-Nosed Reindeer Step 10: Inside the eye, draw a circle for Rudolph's pupil. This circle should be pretty big in relation to the shape of the eye. Place it near the middle. Step 11: At the tip of the muzzle, draw Rudolph's most famous feature: his nose! First draw a curved line for the base, then draw a circle above it for the actual nose. The nose should be a bit smaller than the pupil. Pay attention to its placement. 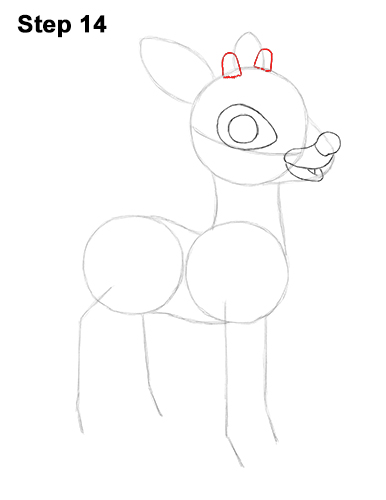 Step 14: For the short reindeer antlers on the head, start by drawing a small line on the top edge of the initial circle for the base. Then draw an arc similar to an upside-down letter U to complete the first antler. Draw Rudolph's other antler to the right the same way but slightly smaller.